A recent Present Value post titled Prioritizing Equity in EV Infrastructure Planning with Data highlighted the unlocked potential of electric vehicles (EVs), along with some of the current pitfalls preventing the industry from being truly equitable and accessible for all. As aforementioned, the journey to cleaner and greener cities is a long one, but with new infrastructure funding injected into America's charging networks, the trillion-dollar bill has more consumers nationwide considering making the switch to EVs. Although Americans are eager to invest, the switch is happening unequally, particularly along income and racial lines.

The popularity of EVs originally emerged from the collective desire to reduce carbon footprints and lower greenhouse gas emissions. Toxic and harmful pollution from cars, and the subsequent highways that intersect through low-income neighborhoods of color, made the concept of electric vehicles seem like the perfect all-encompassing solution to equitable and cleaner air for everyone. Similar to other entry products, when EVs first hit the U.S. market they were mainly branded as luxury vehicles and marketed to the wealthy who could afford their hefty price tag. This resulted in the majority of EV buyers coming from high earning income households— largely leaving out low to moderate earning families. According to a survey by BlastPoint, EV consumers tend to be college educated, high income homeowners, and living in urban environments.

A recent social vulnerability report by the U.S. Environmental Protection Agency (EPA), along with a growing body of literature speaks to the unequal impact of climate change, is projected to mostly effect communities that are not equipped with the capital, resources, or information to recover from the its havoc. The EPA reports that the socially vulnerable populations – based on income, race, ethnicity, and educational attainment – are projected to experience the highest impact of climate change in six categories, with air quality and health being one of them. The also study found that Black and African American individuals are 34% more likely to live in areas with the highest projected increases in childhood asthma. Additionally, air pollution can exacerbate existing health conditions and increase the risk of heart attacks for adults older than 65. 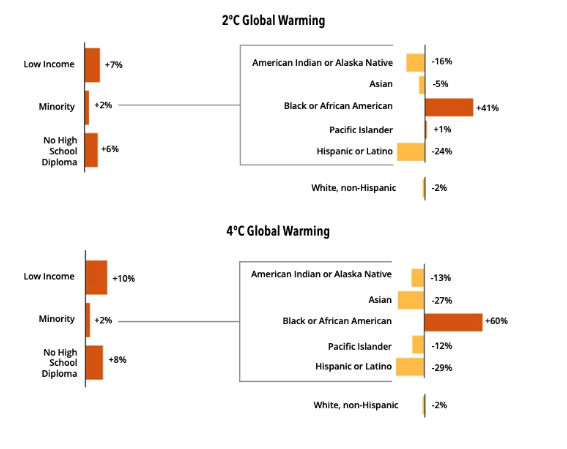 Although the U.S. Federal government has issued up to $7,500 tax credits for the purchase of an EV, it largely benefits those who will owe that amount or more. According to a 2019 Congressional Research Service report, 78% of the federal tax credit was claimed by households with an adjusted gross income of more than $100,000. Furthermore, for high earning households, their EV vehicle is an additional vehicle, not their first. Despite the government's efforts to incentivize EVs, high earning individuals who have participated would have purchased the vehicles regardless of the tax credit.

This disparity within this incentive doesn't actually make EVs more affordable to the general public, and instead perpetuates more financial barriers. Income disparities continue with vehicle ownership costs such as fuel, insurance, maintenance, and purchase costs, which for low-income households, account for a much larger portion of their household budgets. Low-income households that bring in less than $25,000 or less spend nearly 50% of their budget on vehicle ownership cost, while households earning $150,00 or more only spend less than 10% of their annual income. It is clear that low-to moderate income households are best positioned to benefit the most from making the switch to EVs. Considering the potential fuel cost savings, and positive environmental benefits that come with the adoption of EVs, these communities should be prioritized in their employment.

Disparities in where charging infrastructure is located is also a barrier to EV adoption, particularly when looking at renters versus homeowners. Data from the 2017 National Household Travel survey finds that homeowners are more likely to own an EV than renters, even when controlling for income. Renters tend to have a lack of incentive to invest in EVs due to lack of infrastructure like outlets, and electric panels because they don't own the property.

So not only do lower income households disproportionally suffer from poor air quality, but they also tend to drive older, used vehicles that contribute larger shares of pollution emissions into the air. If EVs largely benefit high earning homeowners, while further isolating low-income consumers from participating, who is really benefiting from the social and health benefits of a cleaner environment?

Increase subsidies and incentives for lower income households. Current EV incentive programs benefit high earning households. Equitable access to incentives are crucial to increase the wider usage of these vehicles. Therefore, providing extra incentives for low-to moderate income households is paramount. Removing the income cap on the tax credit program and allowing purchasers to receive their incentive upon purchase of their EV will allow low-income buyers to offset the high upfront cost of EVs. Low earning households typically do not have the upfront cash capital to purchase vehicles and they should have to wait to access their funds.

Rebate Programs for EV Charging Installations for Multi-unit Housing. Due to low-income households being less likely to have charging infrastructure at home, expanding current incentives to include not only the charging equipment costs but also the installation, will help incentivize potential buyers. It would also increase buyer confidence that they have safe and reliable way to charge their EVs. Additionally, low earning households who live in apartments, condos or multi-family units are less likely to not have access to home charging. There will have to be a new policy that addresses EV charging installation for existing multi- unit housing which will help ensure equality in installation. Partnering with affordable housing developers for new build developments that include EV infrastructure will be pivotal with ensuring access to everyone.

How electric cars can advance environmental justice: By putting low-income and racially diverse drivers behind the wheel

6 ways to make electric cars more accessible to lower-income buyers, according to an economist

Make electric vehicles affordable for the rest of us

A perspective on equity in the transition to electric vehicles

Kendra Hills is an intern at Econsult Solutions supporting ESI's Center for the Future of Cities. She is currently a Master's student at the University of Pennsylvania, studying city & regional planning with a concentration in smart cities. 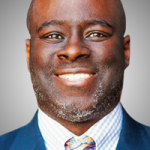 Frank Robinson, Director | robinson@econsultsolutions.com
Frank Robinson is a director at ESI. Mr. Robinson has been a leader in the economic development and sustainable development industries for over 18 years, working with corporate, government and nonprofit clients, banks and credit unions, as well as community development financial institutions (CDFI) and small businesses. With a knack for creatively engaging clients and re-envisioning possibilities, he enjoys hammering out logistics and bringing forth new realities.