Friday, June 17, 2022
Cities of the Future Must be Heat Resilient: A Framework for Combating Urban Heat Islands
Kendra Hills

We are a few short days away from the start of summer and the first heat advisory warnings have been issued across the country— it looks like it’s the start of a very hot summer. Experts at the National Oceanic and Atmospheric Administration (NOAA) released their monthly climate trend report predicting above-average temperatures and below-average participation for most parts of the U.S. (See map below) The northeastern region in particular is expected to see high temperatures throughout the summer, with Philadelphia already experiencing an early spring heat wave in May. 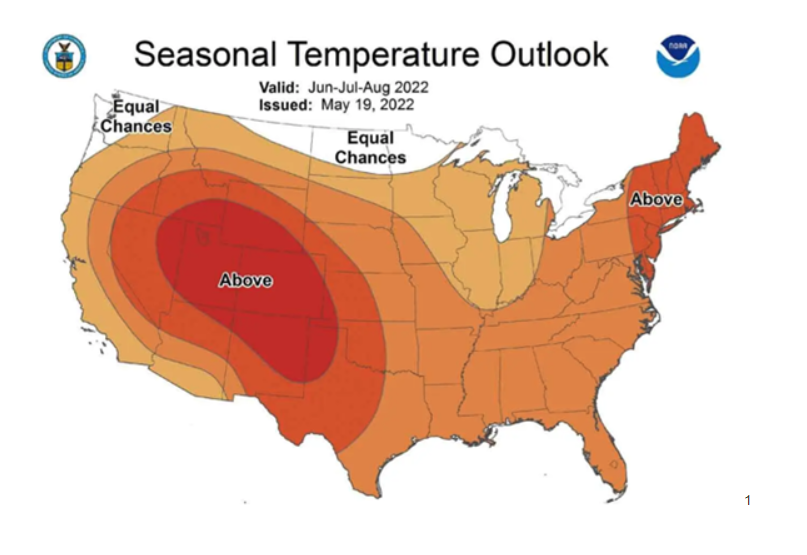 It seems like each summer we are breaking a new record of high temperature across the globe and this, by no means, is a coincidence. Due to increased levels of greenhouse gas emissions in the atmosphere, the earth has seen its hottest days on record in the past 10 years since 2005 according to climate research at NOAA National Centers for Environmental Information, State of the Climate. Higher temperatures have devastating impacts on weather events, increasing both their severity and frequency. Warmer oceans mean more hurricanes, increased rainfall and flooding for coastal cities, severe tornadoes across the Great Plains and parts of the northeast, and devastating wildfires in the west. However, extreme heat is the primary cause of climate-related deaths in the U.S., much deadlier than the aforementioned weather events.

Although extreme heat will be an issue for the U.S. at large, cities are going to see much more exacerbated levels of high temperatures due to a phenomenon that scientists have categorized as the urban heat island (UHI) effect. Cities are hotter than rural areas due to the large concentration of asphalt buildings and cement, which absorb solar heat and reflect it back into the dense city environment. Long periods of extreme heat, reduced nighttime-cooling, and high air pollution levels can have devastating consequences on the cities’ most vulnerable populations. Children, older adults, and individuals with certain medical conditions are particularly susceptible to increased heat-related health problems and heightened mortality rates. This reduces the overall quality of life of residents in cities and can have negative consequences for many other aspects of the city economically.

Urban heat islands and their consequences are not just formed between the city and rural regions comprehensively. Even within city walls, urban heat impacts different parts of the city differently due to the variety of surface cover temperatures. These micro-islands are geographically located in low vegetation, low-income, black and brown neighborhoods, while cooler areas of the city often are wealthier, whiter, and greener according to a 2021 study, with African American residents experiencing more exposure on average.

Creating heat-resilient cities means expanding our knowledge about the different and various ways people experience heat. Understanding the complexities of urban heat and how it impacts each of us differently is crucial in avoiding a one-size-fits-all solution to combating it. Differentiating how low-income residents experience heat versus how farmers or construction workers experience heat will help create intentional and site-specific adaptations and designs while also addressing the actual needs of each resident.

Education will play a huge role in addressing urban heat, and empowering citizens with the information and resources to combat it in their own communities. Implementing a city-wide campaign on extreme heat will increase the public’s awareness of the health risks that come with extreme heat exposure and the cooling opportunities/resources available to them. Heat action plans like Boston’s, and community mapping initiatives like Atlanta’s are setting a great precedent for creating heat strategies that are not only publicly available, but community-involved. This type of public education campaign will be useful in cities that historically do not experience long periods of heat. However, it is important for public awareness about the severity of urban heat to remain at the forefront in cities like Houston, Phoenix, or Orlando where extreme heat exposure is much more common.

Early warning heat advisory communications are also life-saving tools that can be used when the chance of a heat wave does in fact present itself. Philadelphia’s Heat Health Watch Warning System was the first in the country and has proved useful for heatwave forecasting. It has since been implemented in cities worldwide. Providing early information and education about when excessive heat is forecasted, how to respond, and where resources are located are important strategies for mitigating heat crises in cities.

Cities will need to leverage technology to create nature-based design solutions for urban heat adaptation. Resilient strategies like greening roof efforts, planting street trees specifically in tree-poor areas, public green spray grounds and cooling centers are ways to offer communities relief from the summer heat. Green water infrastructure is another vital sustainable strategy that allows for more natural vegetation, soils, and open water surfaces to combat the excessive heat loads within a city block. Green and blue infrastructure designs are not only tools for climate change adaptation, but they also strengthen the capacity of heat resilience within cities.

With climate-informed design, it is important to know that these technologies must work in tandem with other greening solutions. For example, alternative pavement coatings can reduce city temperatures overall due to the materials’ ability to have higher solar reflectance, but studies have shown that their impacts on humans actually increase body temperatures. Scientists and climate activists have echoed that cool pavements paired with other heat-resilient infrastructure like street trees and cooler street corridors would be more impactful to both the city and its inhabitants.

Tackling urban heat and the inequities that come with it will require building out cooling networks where government entities, community organizations, residents, planners, developers, scientists, and the private sector are all in collaboration with one another. This network will need to support one another in UHI mitigation strategies starting with policy adaptations, zoning code refinements, and retrofitting new building code requirements that align with climate-resilient design standards. Developing a citywide network will aid in both the prevention and responsive operations for cities vulnerable to not only UHI but other extreme weather events. Establishing roles like Miami-Dade County’s Chief of Heat Officer will help expand, coordinate and accelerate efforts to reduce and prevent heat related tragedies.

When cities address urban heat, they are advertently addressing inequality. The future of cities will require combating both the imminent consequences of climate change, as well as the inequities and disparities that will be exacerbated because of them. Prioritizing and implementing an action plan for urban heat and establishing a framework that is city–specific, resident–centered, and technologically forward will save lives… especially because it is only going to get hotter from here.

Kendra Hills is an intern at Econsult Solutions supporting ESI’s Center for the Future of Cities. She is currently a Master’s student at the University of Pennsylvania, studying city & regional planning with a concentration in smart cities.